Final Report on the 2017 Earth Week Clean Up

“The 26th annual Earth Week Clean Up of nature sites in Oakville on Saturday, April 22 was a great success,” said Stephen Dankowich, executive director of the Oakville Community Centre for Peace, Ecology and Human Rights and author of this report.

The cool, dry but sunny morning was perfect weather for a Clean Up and the community responded by coming out in big numbers to support the annual litter pick-up.

RECORD NUMBER OF LOCATIONS AND VOLUNTEERS 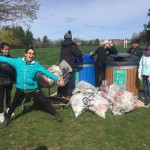 There was a record 51 nature sites cleaned up by 1,162 volunteers. All coordinators did a fantastic job in heading up the clean up in their neighbourhood, distributing bags and gloves and directing volunteers to nature areas needing our attention.

ALLOCATION OF CLEAN UP SITES BY WARD DIVISION
North Oakville hosted 36 locations including 17 in northwest Oakville, 9 in north central Oakville and 10 in northeast Oakville. In south Oakville, there were 8 sites in the southwest, 5 in south central and only 2 in southeast Oakville including Clearview Park which is having its clean up this Saturday, April 29.

21 CLEAN UP SITES STAFFED BY TWENTY OTHER ORGANIZATIONS
Resident associations cleaning up included West River, Bronte Creek, Bronte Village and Clearview. West Harbour is doing a follow-up clean up in early May.

Environmentalists included Change by YOUth and Books with No Bounds, the South Peel Naturalists Club and the Friends of Bronte Creek Park.

The remaining thirty sites were staffed by volunteers with the Oakville Community Centre for Peace, Ecology and Human Rights.

A SPONSORED EVENT
The event is sponsored by the Town of Oakville’s Parks and Open Space Department and sixty-five community organizations. Their support allows this campaign to flourish.

The Town provides bags and gloves and produces a large map of the clean up locations which is displayed in all municipal facilities including libraries, recreation centres and at town hall.

Halton Region Waste Management pays for two garbage trucks to pick up all collected refuse on the afternoon after the Clean Up is concluded.

Several sponsors placed advertisements in our event newspaper which is distributed by coordinators and placed in key commercial outlets and town facilities to raise further awareness of the event. We printed 7,000 copies thanks to the support of these advertisers.

LIST OF THE 51 EARTH WEEK LOCATIONS CLEANED UP:
COORDINATORS ARE THE REAL HEROES OF THE CLEAN UP CAMPAIGN

– Langtry Park
(Change by YOUth and Books with No Bounds)

COORDINATORS MADE SEVERAL SUGGESTIONS TO IMPROVE THE ANNUAL CLEAN UP
It was recommended that we could improve the annual Clean Up in the following ways:
– encourage local businesses to take some responsibility for the mess in the natural areas around their properties; they should sponsor the event and send out their employees to help with the clean up.
– ask coordinators to reach out to schools and businesses in their neighbourhood for support.
– the Town of Oakville should do a lot more to publicize the event as it benefits the most from our work; Councillors should do more to promote it and get their resident associations involved; the weekly community update sent out on Fridays should be promoting it weeks in advance; the town should better acknowledge the coordinators by issuing a letter of thanks and congratulations to them; they should get the large maps displayed in schools and circulate the map more widely electronically; the town should advertise the event using roadside billboards (people saw the many billboards around town promoting the May 6 town Stay Calm event but none for the Clean Up).
– the town needs to provide more garbage cans around parks; for example, it was reported that they are desperately needed at the bus stops on Upper Middle Road and Bishops Gate around Aldercrest Park.
– provide leaf-garden waste bags.
– provide kid size gloves for children ten years of age and younger; available at Dollarama.
– provide garbage grabbers or pick-up sticks with a nail at each site for use by seniors and people with bad backs.
– give away more of the free one-program recreation passes given by the town at each site.
– display more event posters to be facing the sidewalk rather than facing the road.
– change the location name for Sixteen Hollow Park to the Westoak Boulevard Trails.
– encourage schools to construct an enclosure around their dumpsters.
– ask scouts, cubs, guides and brownies to go to locations not covered by the clean up so as not to duplicate our efforts.
– build more awareness by hosting a rally beforehand.
– we are distributing Tim Horton sponsored garbage bags provided by Pitch-In Canada so maybe Tim’s can provide coffee and donuts for each location and distributed by them from each store closest to the clean up locations.
– speak to Macdonald’s and Tim Horton’s as 80% of garbage picked up is their garbage; maybe they could sponsor some garbage cans.
– add a second Clean Up in the fall.
– speak to the principals of high schools to advocate that they educate their students not to litter.

ACCOMPLISHMENTS
The annual Clean Up encourages people to take care of their own neighbourhood and it has substantially contributed to building community by bringing neighbours together. In addition, it saves tens of thousands of dollars a year for the local taxpayer and significantly boosts property values.

The Clean Up campaign promotes awareness and respect for biodiversity, local nature and our trails, parks and waterways. We are beautifying the local natural environment, protecting wildlife and benefiting people’s health while doing our best to encourage environmental activism at Oakville schools and throughout our community.

THE MANY BENEFITS OF THE ANNUAL CLEAN UP
“This annual event is the largest community-wide Clean Up in Canada during Earth Week. 79,500 students and citizens have now participated since 1992,” remarked Don Meade, a Board Member.

“The Clean Up is a family activity that will be remembered, cherished and talked about for years to come. By participating, parents are educating their children about the importance of the natural environment in a very practical way,” said Mr. Meade.

“The Clean Up will allow everyone to enjoy garbage-free parks and trails this spring and summer. We are very grateful for the financial support of sixty-six local sponsors including four participating schools. We encourage and need more local organizations to sponsor the event. As the environment is everyone’s responsibility, we are very pleased that so many people have volunteered to make a big difference for our local environment in Oakville over the past twenty-six years. Let’s make the 27th annual clean up our best ever in 2018,” he concluded.

EARTH DAY CELEBRATIONS CONTINUED AFTER CLEAN UP WAS OVER
The annual Clean Up is a special occasion for many neighbourhoods. People renew acquaintances with friends and neighbours at the Clean Up. Organizations gather their members and bring them together in a positive and constructive activity at their locations. Some coordinators and organizations hosted a BBQ for the volunteers or treated their volunteers with drinks and snacks to enjoy during and after the event. Some coordinators reached out to local businesses for support and donations of food or snacks for their volunteers.

This spring, seven locations in south Oakville thoroughly enjoyed pizza donated by Panago Pizza South Oakville on Cornwall Road after their clean up was completed. The immense generosity of Panago Pizza was greatly appreciated by volunteers at Coronation Park, Woodhaven Park and Sedgewick Forest, Hogg’s Back Park and Forster Park, Perkins Passage, the YMCA, Busby Park and at Dunvegan Park.

LOOKING FORWARD TO 2018
We look forward to everyone pitching in again in 2018 as our local environment truly needs your attention and support. Help clean up a park, trail, ravine, green space, woodlot or lakefront near to where you live.

It is wonderful that we started with just one location in 1992 and that the campaign has grown so much since. Individuals, families, students, clubs, not for profit groups, business and governmental organizations will be participating again in 2018.

HISTORY OF THE EARTH WEEK CLEAN UP
The campaign has been a real grass roots accomplishment. Over the years, citizens concerned about littering and the protection of our local natural environment became coordinators of the Clean Up in their neighbourhood.

Since 1992, there have been a total of 140 location coordinators. There were thirteen new coordinators in 2017.

Some locations lasted for only one year while others have been ongoing almost since the start. Many locations have had changes of coordinators with one person finding someone else to replace them and keep the clean up going in that neighbourhood. As well, many locations suspended their clean up because the coordinator reported that the clean up was so successful that their green space no longer required their annual maintenance of it. Many past coordinators moved away to another community.

Since 1992, when there were thirty volunteers cleaning up under the Bronte Road Bridge at the QEW, the campaign has involved more than 79,500 students and citizens.

All past and present coordinators truly have made a big difference in our community. They took the bold step of becoming an organizer for the local environment. As a volunteer coordinator, they have become a source of inspiration for others who share their concerns and joined in on clean up day.

The response from the community for this event has been tremendous. Thank you very much!

CONTACT INFORMATION
It’s not too early to set up a new location for clean up in 2018. For more information, please contact the Oakville Community Centre for Peace, Ecology and Human Rights at (905) 849-5501, by e-mail at info@oakvillepeacecentre.org or by writing to P.O. Box 52007, Oakville L6J 7N5.