The 26th annual Earth Week Clean Up of nature sites in Oakville on Saturday, April 22 was a great success!

The 26th annual Earth Week Clean Up of Nature Sites in Oakville
on Saturday, April 22, 2017 was organized by the:

“The 26th annual Earth Week Clean Up of nature sites in Oakville on Saturday, April 22 was a great success,” said Stephen Dankowich, executive director of the Oakville Community Centre for Peace, Ecology and Human Rights.

“The cool, dry but sunny morning was perfect weather for a Clean Up and the community responded by coming out in big numbers to support the annual litter pick-up,” he stated. 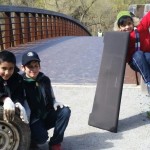 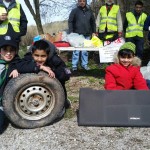 “There was a record 51 nature sites cleaned up by 1,162 volunteers. Coordinators did a fantastic job in heading up the clean up in their neighbourhood, distributing bags and gloves and directing volunteers to nature areas needing our attention,” he remarked.

“The total weight of all garbage removed was 5,050 kilograms including 750 kilograms of metal as reported by LK Trucking, an independent trucking firm hired by Halton Region Waste Management to haul away all garbage collected.

“The event was sponsored by the Town of Oakville’s Parks and Open Space Department and sixty-five community organizations and their support allows this campaign to flourish,” he said.
“The annual Clean Up encourages people to take care of their own neighbourhood and it has contributed to building community by bringing neighbours together. In addition, it saves tens of thousands of dollars a year for the local taxpayer and significantly boosts property values,” he stated. 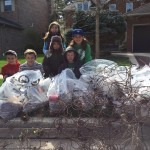 “The Clean Up campaign promotes awareness and respect for biodiversity, local nature and our trails, parks and waterways. We are beautifying the local natural environment, protecting wildlife and benefiting people’s health while doing our best to encourage environmental activism in our schools and throughout our community,” he concluded.